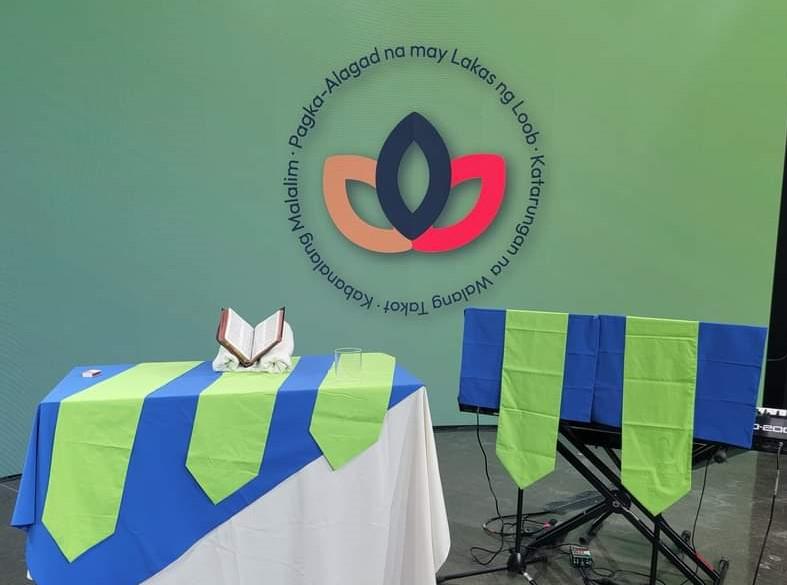 The United Church of Canada

Posted on: by Cara James

The Council received with great enthusiasm the news that the Rev. Dr. Carmen Lansdowne has been elected as the 44th Moderator of The United Church of Canada. In speaking to the Council, the Moderator-elect reflected on a scarcity mind-set in the church, offering the observation that Indigenous peoples have a gift in seeing the world as a place of abundance. Stating that “for too long, our words and messages to each other in the church have been centred around fear,” she invoked the visions promised in the book of Joel and of Acts, inviting the church to embrace prophecy and dreams and “live into new and engaging ways of living into the beloved kin-dom in the world.” Speaking of priority concerns—reconciliation, climate emergency, and economic inequality—she expressed gratitude at the opportunity to continue in conversation and discipleship together over the coming triennium.

Honoured Elder Rev. Elenor Thompson offered prayer and gratitude for being present to witness the first Indigenous woman elected as the next Moderator. She led in congratulations to the Moderator-Elect, joined in by virtual hallelujahs, celebration, and applause. Installation of the 44th Moderator will happen on August 7, at Canadian Memorial United Church in Vancouver. Everyone is invited to attend, either in-person or through watching the service on the United Church’s YouTube channel.

Torrin Maag spoke on behalf of the Equity Team, rejoicing in how the Council has responded to the essence of people’s discussions, including holding space for under-heard voices. While the team expressed confidence that Council will continue to grow in its ability to make decisions equitably, they noted that only a few people have been offering verbal opinions, and so invited the Council to continue to “draw the circle wider.”

Contributions by former Moderator The Very Rev. Jordan Cantwell and Allan Buckingham encouraged the Council to keep focused on making decisions, noting that any proposals not addressed will be referred to the General Council Executive.

Regarding a proposal on creating a Clergy Consultative Committee (originally referred to as ECO01), the Council chose to take no further action, and referred ample small group discussion notes on this topic to the General Secretary for consideration when implementing other related proposals.

The Council approved a motion (originating as ECO02) regarding cooperative communities of faith that will strengthen the way the United Church recognizes and supports these linked ministries, including with resources, guidelines, and better access to ChurchHub.

A complex motion regarding Ministry Leadership in the 2020s (originally GCE06) was separated into two parts, with “Part B” on Designated Lay Ministry to return to Council at a later point. Council approved the remaining motion which focused on facilitating lay-led ministry in the best way possible, enabling space within United Church of Canada policies for ongoing support and connection.

This Decision session also included elements of worship, a testimony by Korean partner The Rev. Eun-yung Kim, and family news offered by Friends of Council. It began with a video highlighting the ministry of Broadview magazine. Editor Jocelyn Bell concluded her video address by drawing the Council’s attention to the upcoming September issue, which is guest-edited by Rev. Murray Pruden, Executive Minister for Indigenous Ministries and Justice.