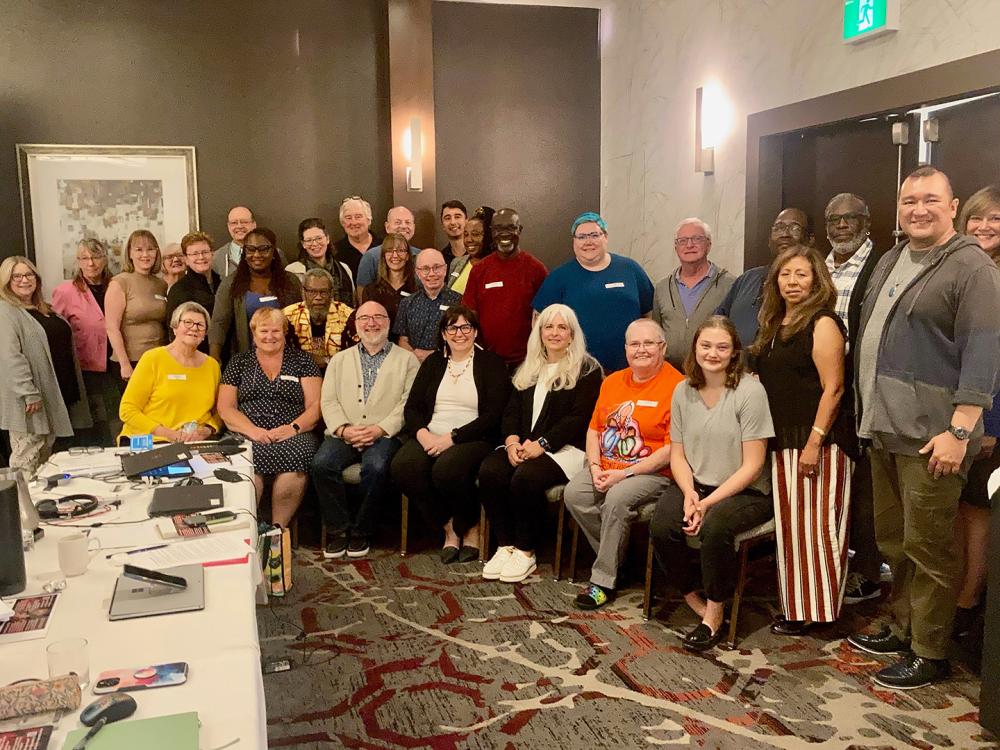 From September 16 to 18, 2022, members of the 44th General Council Executive (GCE) gathered in person in Mississauga, ON. This gathering overlapped with meetings of the Staff Leaders of the General Council. The time together included community building and worship, as well as orientation sessions preparing the Executive for the work in front of it. On September 18, the GCE held its first business meeting.

Beginning with more procedural matters, the GCE adopted the minutes of the 43rd General Council Executive (April 2022), ratified the subsequent decisions of the Sub-Executive, named corresponding members to the meeting, received a financial report, and nominated members of the Executive to key committees and the Pension Board.

Work of the Moderator

The new Moderator, the Right Rev. Dr. Carmen Lansdowne, and the Executive shared common appreciation for a moving installation service, expressing particular thanks to the Rev. Graham Brownmiller, the host community of Canadian Memorial United, and the whole of the worship committee for making the close of General Council 44 a beautiful expression of faith. Moderator Lansdowne also thanked her parents, aunt, uncle, and the Hereditary Chiefs who enabled Heiltsuk culture and tradition to be powerfully present.

In the immediate period following the installation, the Moderator’s Advisory Committee met to discern the highest and best use of the office of the Moderator and the Rev. Lansdowne’s particular skills and gifts. In addition to being an ambassador for the new Call and Vision of The United Church of Canada, the Moderator has identified three main priorities:

The Moderator began her tenure by joining the United Church delegation to the 11th General Assembly of the World Council of Churches, being present at the funeral of respected Elder Bernice Saulteaux, and representing the church at a Government of Canada consultation on unmarked graves.

Regarding a further GC44 proposal on meeting quorum, the Executive directed the General Secretary to clarify that called or appointed ministry personnel need to be present at meetings of a community of faith for quorum to be met (WF34/NS02). Given the importance of recognition of the Armenian Genocide, the Executive decided to recognize April 24 as Armenian Genocide Memorial Day, while leaving questions of implementation to the General Secretary (WF40/NEW 02).

A number of the proposals were considered in plenary. On a proposal regarding membership in the United Church through non-congregational communities of faith (WF06/N:ka02), the Executive affirmed enabling these congregations to welcome new full members to The United Church of Canada by baptism, confirmation, or profession of faith, with implementation informed by an anticipated study in discipleship and membership. A remit may be required.

Recognizing the significant developments since the creation of a regional proposal on Alberni Residential Institution in May 2021, GCE decided to focus action on committing to developing a principles-based approach to reparations, continuing to be in relationship with Indigenous communities in an Indigenous-led and trauma-informed way, and ensuring communities impacted by the Alberni Institution and others have access to the Bringing the Children Home initiative (WF01/PM01).

The Executive deferred until its next meeting a set of interconnected proposals on ministry personnel and ongoing essential agreement with statements of doctrine (WF13/CS02, CW01, WOW01), as well as another proposal related to criteria for ending a pastoral relationship (WF35/NS03).

The General Council Executive concluded its meeting by considering its current membership vacancy and decided it will gain a broader sense of the experience around the table and the work in front of it in before moving to an appointment.

The General Council Executive will meet again on November 18 and 19.