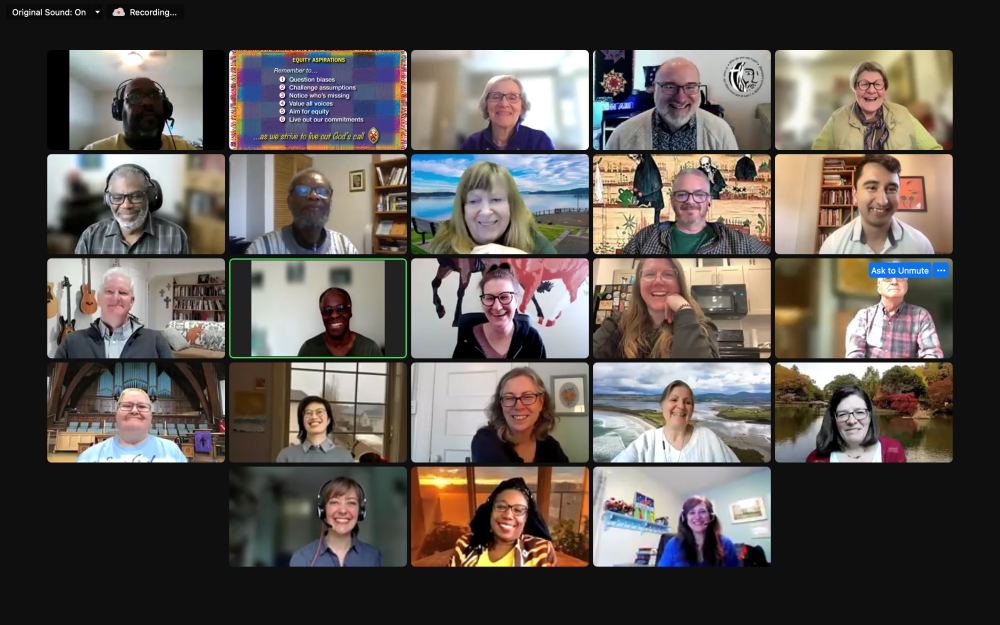 The final meeting of the General Council 43 Executive

Posted on: by Cara James

The 4th Decision Session began with Friends of Council sharing information on the make up of this General Council—a gathering of 256 Commissioners, within an overall community of 500 persons.

An early step in this Decision session was for the Council to elect seven persons to serve on the General Council Executive, from the rise of this Council to the 46th General Council (2028): Michael Caveney, M Chorney, Catherine Glover, Wilson Gonese, Marlene Lightning, Kathleen (Kit) Loewen, and Thea Sheridan-Jonah. They will join the Moderator, past Moderator, and General Secretary, as well as the following persons from the current Executive who are continuing to serve until the 45th General Council (2025): Teresa Burnett-Cole (National Indigenous Council), Mitchell Anderson, Kathy Brett, Samuel Dansokho, Paul Douglas Walfall, Jane McDonald, and Arlyce Schiebout.

Seeking the wisdom of global ecumenical partners and denominations, the Council approved a motion (originating as CW02), to invite a multilateral ecumenical dialogue of Canadian mainline protestant churches to prayerfully discuss the possibility of organic church union. The motion was clear about the need for continued openness to the movement of the Holy Spirit that might prompt other forms of greater partnership.

There was significant discussion on a proposal on “membership in the United Church through non-congregational communities of faith” before it was referred back to the Business Table to bring clarified wording to the Council. A proposed way forward, relating to three originating proposals on “essential agreement”, was similarly sent back to the Business Table, to be brought back at a later date.

Tim Blair, CEO of the United Property Resource Corporation (Kindred Works) addressed the Council on this critical work, based on the vision that secure and stable homes can be a foundation for life of opportunity. UPRC is transforming church properties into housing and gathering spaces for community needs while preserving and sustaining worshipping space. UPRC is committed to creating 5000 new affordable housing spaces in the next five years, providing homes for 34,000 Canadians. They are currently working with 65 congregations across the country, relating to 4500 potential units, with emerging partnerships with the Evangelical Lutheran Church in Canada, Presbyterian Church in Canada, and Anglican Church of Canada. The way of working includes labour opportunities for equity-seeking groups, partnerships with Indigenous businesses, accessibility commitments, and reductions in carbon emissions. It is expected that a first shovel will be in the ground by the end of this year.

In this very full session, the Council also heard inspiring testimonies from two former Moderators. Mardi Tindal offered a reflection on Jesus as the Cosmic Christ who opens us to unity with all living things. Mardi spoke of Jesus as the Christ of the whole universe in which all polarities are reconciled—both companion and Christ as model and teacher—for how we are called to live love. The Very Rev. N. Bruce McLeod spoke of Jesus as a window where everything that really matters comes into focus. He shared a picture of Jesus beckoning from a place ahead of us, calling the church forward for the sake of the aching world.

The session ended with Commissioners casting their votes for election of the Moderator. Results of the election are expected in the next decision session.